If you’ve ever seen an insect and thought it was a bee, you’re not alone! Many types of insects that look like bees can be found all around the world.

Various insects have a similar appearance to bees, from bumblebees to leafcutter bees. In this blog post, we’ll look at 16 types of insects that look like bees.

Read on to learn more about these fascinating creatures!

The Hoverfly, or Syrphidae, is one of the most common types of insects that look like bees.

These flies are about the same size as bees and have yellow and black stripes on their abdomens, just like bees. They also have clear wings with yellow markings, making them look even more like bees.

However, unlike bees, hoverflies do not sting or bite. Instead, they feed on nectar and pollen from flowers, making them important pollinators.

In addition, they are valuable predators in controlling pest populations. So while they may look like bees, they provide important benefits to our ecosystem!

The Oblique Streaktail (Allograpta obliqua) is a bee-mimicking fly in the eastern United States and Canada.

As its name suggests, this fly looks a lot like a bee, with black and yellow stripes along its body and long antennae.

Its wings are also black and yellow and can often be seen in flight, hovering around flowers and other areas where bees might be found.

The Oblique Streaktail can be distinguished from bees by its lack of hair on its body and its oblong-shaped head.

Despite its bee-like appearance, the Oblique Streaktail does not sting, making it one of many other types of insects that look like bees but are harmless to humans.

When it comes to types of insects that look like bees, one of the most common is the drone fly, also known as Eristalis Tenax.

This fly has a slender body and a black-and-yellow pattern strikingly similar to a bee. Drone flies typically measure around 10 to 15 millimeters in length and have a wingspan of about 21 to 35 millimeters.

They often hover around flowers, feeding on the nectar and pollen. Like many other species, the drone fly prefers damp, dark areas to spend time in and can often be found near ponds and slow-moving streams.

Bee-fly (Bombylius) is one of the most common types of insects that look like bees. The bee fly can be easily identified by its small size, slender body, and long beak. These flies have a very distinctive buzz, which is similar to that of a bee.

Bee flies often hover near flowers in search of nectar and pollen. They are also found near rotting organic matter where they lay their eggs. As larvae, bee flies feed on the larvae of other insects.

Bee flies are harmless to humans and are beneficial to gardens and farms because they help control insect pests.

They belong to the genus Vespula and are often confused with honey bees or bumblebees due to their black and yellow coloring. However, there are some key differences between them.

Yellowjackets have a thin waist and can grow up to an inch long. They are also much more aggressive than bees and sting multiple times if provoked. They feed on sugary substances such as fruit, nectar, and garbage.

While they are beneficial to the environment in that they help control the population of other insects, their stings can be painful and dangerous for humans. Keeping trash cans sealed and away from your living space is best to avoid contact with them.

Types of insects that look like bees include the Common Wasp (Vespula vulgaris). This insect is typically black and yellow and can be identified by its distinctive striped abdomen. Common Wasps can be found throughout North America, Europe, and Asia.

They feed on other insects, nectar, and sweet fruits and often construct nests out of chewed wood pulp near human dwellings.

Despite their small size, they are known to be aggressive when threatened, so it is important to exercise caution when encountering one.

The European Paper Wasp (Polistes dominula) is one of the many types of insects that look like bees. These wasps are typically black and yellow striped, similar to a bee’s markings. However, there are some distinct differences between the two.

European Paper Wasps are slimmer and longer than bees and have very long antennae. They also have three distinct body parts: the head, thorax, and abdomen.

This species of wasp can be found throughout Europe and prefers to nest in trees, shrubs, and other areas of vegetation.

Unlike bees, these wasps do not have an established hive or colony and prefer to be solitary creatures. They build individual nests out of paper-like material made by the wasps themselves.

One of the most common types of insects that look like bees is the European Hornet (Vespa crabro).

This large and colorful insect has a very similar shape to bees and can easily be mistaken for one. Its body is typically black and yellow, with dark wings and a dark head.

Its size ranges from 1.5 to 2 inches in length, making it one of the largest species of hornet. European Hornets are social creatures and live in colonies containing up to 700 individuals. They can be found in Europe, Asia, and North America and feed on other insects.

Their nests are made from chewed-up wood fibers, which they form into a paper-like material. While they don’t usually bother humans, they attack if they feel threatened or disturb their nest.

One of the most recognizable types of insects that look like bees is the Asian hornet, Vespa velutina. This hornet species is native to Asia and has spread to many other parts of the world due to international trade.

The Asian hornet has a distinct yellow and black striped body, much like a bee, but larger than most bees.

Additionally, they have long antennae with white tips. The Asian hornet builds its nest high in the trees and feeds on other insects and honeydew.

When defending their nest, these hornets become aggressive and can sting humans multiple times. Therefore, it is important to be aware of them and to avoid areas where there might be an active nest.

The Asian Horntail (Eriotremex formosanus) is one of the many types of insects that look like bees. This insect can be identified by its black-and-yellow striped body, dark head, and long tail.

The Asian Horntail is native to East Asia and is often seen around trees and bushes in gardens, orchards, and woodlands.

While it looks like a bee, this insect does not produce honey or sting. Its long tail is used for digging and burrowing.

When threatened, this species raises its tail as a defense mechanism, making it appear larger and scaring away predators.

The Broad-Bordered Bee Hawk-Moth (Hemaris fuciformis) is an insect that looks strikingly similar to a bee. With its vibrant yellow and black markings, it is often mistaken for a bee when flying about during the day.

These types of insects that look like bees feed on nectar from flowers like honeysuckle and privet and can often be seen hovering around them in mid-air.

Its wingspan can reach up to 7 cm, giving it a large and impressive appearance. This species is found throughout Europe, the Middle East, and some parts of North Africa.

The Yellow-Jacket Mimic Moth (Pennisetia marginata) is one of the most commonly mistaken types of insects that look like bees.

This species is found in the southwestern US and parts of Mexico. It has a small, black body and bright yellow stripes on its wings.

Its antennae are quite long, and it has a pair of yellow-tipped abdominal tails resembling the wasp. The mimic moth flies around flowers to feed on nectar and is mistaken for a bee due to its similar coloration and size.

However, its behavior is completely different from that of bees, as it does not sting or create honey.

The Bee Robber Moth, also known as the Death’s Head Moth, is one of the many types of insects that look like bees.

This moth is native to Europe, North Africa, and some parts of Asia and is often mistaken for a bumblebee due to its striking coloration.

SEE>  15 Types of Bees in Colorado

The Bee Robber Moth can be identified by its distinct yellow-orange head with black stripes and a large black spot on the back of its thorax that looks like a human skull. Its wings are a mottled brown and yellow, with a black pattern running along the edges.

It has a wingspan of about 2 inches and can fly quickly, making it difficult to capture. Despite its intimidating appearance, the Bee Robber Moth is harmless and does not sting or bite.

The Snowberry Clearwing Moth, also known as Hemaris diffinis, is an insect that looks like bees.

This moth can be found in North America from southern Canada to Central America and throughout Europe. It has a grayish-brown body and wings with black-and-white banded stripes.

Its wingspan can reach up to 3 cm (1.2 in). It is also very active during the day and flies fast, similar to a bee. Its body is covered in soft hair, giving it a fuzzy appearance.

It is common to see Snowberry Clearwing Moths foraging for pollen and nectar on flowers like thistles, dandelions, and roses.

The bee beetle, or Trichius fasciatus, is an insect that looks like a bee. These beetles are quite large and have black and yellow banded bodies, giving them their distinctive bee-like appearance.

The front of their head has long antennae, and their rear legs are also quite long. These types of insects that look like bees can be found in Europe, Asia, and North America wooded areas.

They feed on pollen, nectar, and other plant material and prefer to live in warm, dry climates. While they are not as well-known as other types of bees, they still play an important role in pollination.

Did you know there are types of insects that look like bees but are something else entirely? These so-called bees are a variety of different species from the order Hymenoptera.

One example is the Four-Spotted Velvet Ant (Dasymutilla quadriguttata). This ant is native to the United States and has a distinct four-spot pattern on its back.

The velvet ant looks like a bee due to its orange and black colors, but it is an ant. While this ant is not venomous, it will use its pincers to defend itself if threatened.

So, if you see an insect that looks like a bee but has four spots on its back, chances are it’s a Four-Spotted Velvet Ant.

When it comes to insects that look like bees, there are several types that you may encounter. Most of these insects have black and yellow stripes, and some even have wings like bees.

One of my favorite types of insects that look like bees is the bumblebee. Bumblebees have thick, fuzzy coats with yellow and black stripes and can buzz around flowers and plants.

They are beneficial to gardeners because they pollinate flowers and other plants. 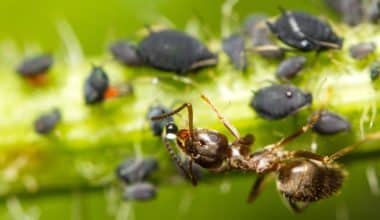 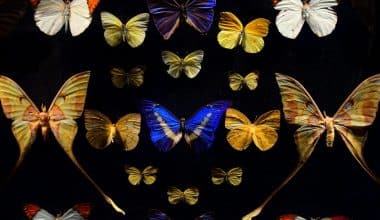 Read More
IInsects
At the last count, there are 37 Types of Butterflies in Ohio  (see the list below). Though Ohio… 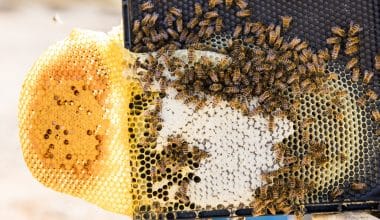 Read More
IInsects
How many types of bees in Wisconsin? There are more than you might think, and all of them… 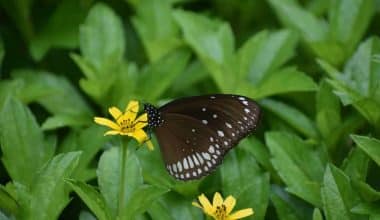 Read More
IInsects
Welcome to the vibrant and enchanting world of types of butterflies in Madagascar! With so many species of… 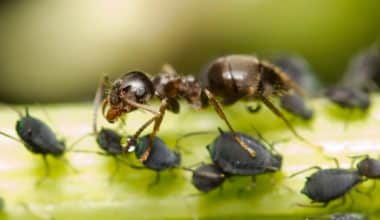 Read More
IInsects
Did you know there are more than 1,000 species of ants in the United States? Arizona has its…