There exist many types of insects without different ways of habitation. Some of these insects are more destructive.

Some of them feed on animals and other substances. However, there are many types of insects that eat wood.

Some are specialists, while others are generalists. These insects are more destructive than others. This article points to the types of insects that eat wood.

Insects are pancrustacean hexapod invertebrates belonging to Insecta. They make up the majority of the arthropod phylum.

Insects have a three-part body; head, thorax, and abdomen. Some of their blood circulates in an exposure chamber known as the hemocoel.

Almost all insects develop from eggs. The four phases of the insect life cycle are egg, larval, pupa, and adult. Only some bugs will complete all four stages.

Types of Insects That Eat Wood

There are many different types of insects that eat wood. Several of these wood-eating insects represent severe hazards to land and forests. However, not all insects that harm wood consume it.

There are many different types of insects that eat wood. The most common type of insect that feeds on wood is termite.

Termites are small, winged creatures that live in colonies underground. They tunnel through the soil to reach the wood, which they then eat.

Other common wood-eating insects include carpenter ants and wood-boring beetles. These insects can cause severe damage to homes and other structures made of wood.

Below are the list and the way of digestion of the types of insects that eat wood.

Termites are part of the types of insects that eat wood. They are small, winged creatures that are often mistaken for ants.

While they may seem harmless, termites can cause severe damage to homes and other structures made of wood.

They typically live in underground colonies, tunneling through the soil to reach their food source.

When they find a suitable piece of wood, they will start eating it from the inside out. This can weaken the structure of the wood and eventually cause it to collapse.

However, If you suspect that you have termites in your home, it is essential to contact a pest control professional right away.

Termites come in three main categories. We can discover up to 45 species of termites in the U.S., each of which fits into one of the three primary termite types: Subterranean, Drywood, and Dampwood.

The Rhinotermitidae family includes subterranean termites. This species creates the enormous nests of any insect in the United States and lives on earth.

Subterranean termites caused most termite damage in this nation, which you can see in every state except Alaska.

Drywood termites of the family of Kalotermitidae primarily inhabit wood. These habitats include dead trees, hardwood flooring, and the like.

They don’t need contact with soil, unlike subterranean termites. However, homes can sustain considerable damage from some dry wood termite species.

Dampwood termites are one of the most common types of termites. They are often found in damp wood, which is why we call them damp wood termites.

These termites cannot survive in dry wood, so they are often found in areas high in moisture.

However, they are usually brown or black and are more significant than other termites. These termites cause extensive wood damage, making them structurally unsound.

Wood-boring beetles are one of the most common types of insects that eat wood. These beetles can bore into the wood of trees and other plants to get the food they need.

This can cause a lot of damage to the plant, and it can also make the plant more susceptible to disease.

Here are the five most common kinds of woodworm beetles found in the U.K., along with tips on identifying woodworm species and damage.

The furniture beetle is the most minor and common wood pest in the United Kingdom. It damages furniture, musical instruments, decorative woodwork, and other items with a length of about 3-5mm.

You can find adult beetles in the late spring and early summer. Larvae typically live in the woods for 3-5 years.

The death watch beetle is a reddish-brown wood boring beetle with a slightly furry appearance similar to a bee.

The adult beetle measures about 7mm in length, while the larvae measure approximately 1cm.

It got its name from the ‘ticking’ mating call it makes at night by knocking its head or jaws against the sides of the tunnels as it bores, which counts down the seconds until death.

They frequently pull in their legs and ‘play dead’ when disturbed. The death watch beetle prefers heavy hardwoods such as oak and elm, decaying chestnut, and, less frequently, softwoods.

Larvae can survive for up to seven years in the woods. However, extensive tunnel builders can cause significant structural damage. They may emerge after a while.

Recognize them; they are small, brown, and furry. They create small, neat holes around 3mm in diameter with sharp edges. These insects also make a ‘ticking’ at night, especially in summer.

The house borer, which is also the house longhorn woodworm beetle. It is a severe timber pest that may necessitate specialized treatment.

This insect coat is dark brown to black, but it can appear grey due to the light fur on its head and back.

This boring wood beetle prefers the sapwood of softwood timber, such as pine, fir, and spruce. Thus, they can quickly attack the framework, joists, and rafters in new houses. It is most active in the summer, and adults live for about 3-4 weeks.

The larvae can live in the wood for 2 to 10 years. Adults range in size from just under a centimeter to around 2.5cm in length. Larvae can grow quite large, measuring 2-3 cm in length.

The larvae of the House Longhorn beetle are voracious consumers of the right kind of wood, and by the time the adults emerge, they may have already caused significant structural damage to the timber. It is a destructive insect under the types of insects that eat wood.

The flattish, reddish-brown powder post beetle is a common pest of hardwoods that feeds on the starch and protein found in sapwood of deciduous trees.

Adult powder post beetles are small at 3-6mm in length. Larvae have dark brown heads and are white or cream in color.

They are usually seen in timber paneling, antiques, crates, and door frames. Powder post beetles find oak, cherry, and hickory hardwood floors particularly attractive. It can also infest bamboo and can be a significant issue in lumber yards.

This insect gets its name because, given enough time and opportunity, it can turn wood into fine, powdery dust.

Because this beetle is primarily active at night, homeowners are likelier to notice the damage and the boreholes than the insects.

It rarely uses wood older than five years and prefers woodhumid or moist wood (above 12%).

The larvae are so named because they are frequently found in the pilings and timbers of wharves and boat yards in freshwater and coastal areas.

As a result, they require decaying wet wood and are infested with fungus. Long and slender, with long, pronounced antennae contrasting with the black bands on the wing casings and the tops of the legs closest to the body.

SEE>  48 Types of Beetles in Minnesota

Adults stand about a centimeter taller. When large numbers of wharf borer beetle adults emerge, they are frequently misidentified as cockroaches.

Eggs to adults usually take 12 months to develop, but it can take up to two years, with adults emerging from June to August.

We can distinguish weevils from their long, narrow snouts. There are over 95,000 types of weevils, and not all consume wood.

Many of them are well-known agricultural pests, such as the boll weevil and the maize weevil, which can destroy entire crops.

The wood-boring weevil, for instance, is one of the types of insects that eat wood. However, unlike most weevils and every other insect on this list, it is not a pest to humans.

In other words, it consumes rotten wood and thus does not infest buildings or furniture.

Many different types of weevils eat wood. Some of the most common include the powder post weevil, the sapwood weevil, and the deathwatch weevil.

The powder post weevil is a small, dark-colored beetle that is a severe pest of wood. The adults lay their eggs in small holes they bore into the wood, and the larvae feed on the wood, causing it to become powdery.

The weevils can cause severe damage to houses, furniture, and other wooden structures.

The deathwatch weevil is a loud type of weevil, a ticking noise. You can see these insects in many parts of the world and they are often considered a nuisance.

The deathwatch weevil gets its name from its habit of making a ticking noise similar to a watch or clock.

While it is true that Termites do eat wood, they are not the only types of insects that eat wood. Wood-eating insects are more common than you would think.

However, some of the insects that eat wood named in this article are the carpenter bees, the powder post beetle, the death watch beetle, and the furniture beetle. 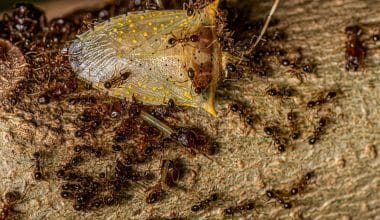 Read More
IInsects
Do you live in Maryland, and have you ever seen ants around your home? You’re not alone! Ants… 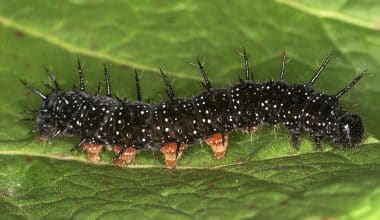 Read More
IInsects
Who knew there were so many types of caterpillars in Georgia? This article will explain how to identify… 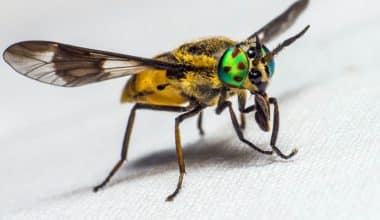 Read More
IInsects
Whether you’re a nature enthusiast, an outdoorsman, or just curious about the various types of flies in Georgia,… 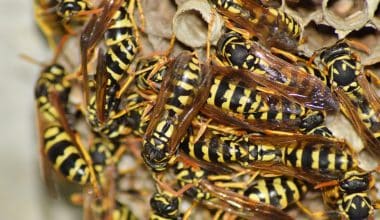 Read More
IInsects
Have you ever wondered about the types of wasps in Maryland? Wasps can benefit the environment, so it’s… 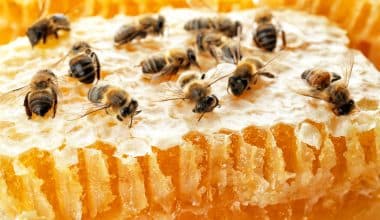