Bamboo rats come in size from the greater bamboo rat, which is usually around 15 to 25 cm in length (head and body).

However, all bamboo rats are large rodents that are also naturally slow-moving. Bamboo rats live and source for food in extensive burrow systems, and they hardly ever spend enough time above ground.

These rodents are more comfortable under the soil because they feed on the underground roots of plants. Bamboo rats live at altitudes of 1200 to 4000 m and feed mainly on bamboo and live in dense bamboo forests or plantations (except for the lesser bamboo rat).

While the lesser bamboo rat is not much different from the other species, it is more variable in its habitat, residing in forests, grassy areas, and sometimes in people’s gardens. This species of bamboo rats eat a wider variety of vegetation.

All species of bamboo rats are seen as agricultural pests, basically because they consume the roots of a variety of crop plants such as sugar cane, tapioca, and tea bushes.

Still, these rodents are also recognized as healthy food animals. The Chinese bamboo rats are sold as meat in food markets in China.

Bamboo rats are natural hosts for Talaromyces marneffei, the disease-causing mold which is endemic in all species of this rodent in Southeast Asia.

The bamboo rats are classified as ‘least concern’ on the IUCN Red List.

The species of bamboo rats are

As the name of this rodent suggests, they primarily feed on bamboo roots and shoots. Bamboo rats can also eat fallen fruit, seeds, and leaves.

Because the Lesser Bamboo Rat is more variable in its habitat, it also consumes a wider variety of food.

Bamboo rats inhabit forests with plenty of bamboos. They are a nocturnal species and spends their daytime inside the holes or burrow only emerging at night in search of food.

The female bamboo rat is pregnant with its babies for about 22 days. The baby bamboo rats are born without fur and blind.

The newborn rats require 24 days before they can finally open their eyes and an additional couple of weeks for their fur to be fully­grown. The mother bamboo rat nurses her young for three months before they become independent of her.

Read:  What is an Animal Shelter?

Did you know that when you take a walk in the forest and hear the sound “boop…boop…boop” from under the ground, it is most likely a bamboo rat telling you you’re trespassing?

Let us know what you think about bamboo rats. Leave a comment below.

What is an Animal Shelter? 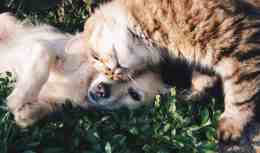 10 Animals That Can’t Be Domesticated