What’s the Difference Between Wasps and Hornets?

The difference between Wasps and hornets is not too distinct since they both belong to the Vespidae family.

There are approximately 100,000 species of wasps known to science, and hornets are a subspecies of the wasp family.

Most of us learned at a young age to steer clear of nests of wasps and hornets and avoid any contact with these insects.

You do realize that Mother Nature did not randomly choose to paint these insects with vivid stripes, do you not? It’s possible that the reason you think it isn’t the real one.

Their vivid colors or striped patterns serve primarily as a protection tactic, even though they can be harmful insects.

As long as you stay away from their nests, you won’t have to worry about being attacked by these flying insects very often.

However, if they decide to establish their nest in your house or place of business, this may quickly become a significant issue.

In this post, we’ll examine the difference between Wasps and hornets and do our best to end the age-old argument.

Hornets are large wasps, with some species growing to a length of up to 5.5 centimeters. The heads of true hornets are broader than those of other types of wasps, and their abdomens are larger and more rounded than other wasps. Each hornet possesses two separate sets of wings.

Wasps can vary greatly in appearance from species to species; some species do not even have wings.

However, the most common characteristics of a wasp include the following:

Another distinguishable difference between Wasps and hornets is their lifecycle. All hornet species are social insects, meaning they construct a nest communally, dwell in colonies, and have established social orders.

In the spring, a fertilized queen will build a new nest at a higher elevation than the previous one and begin laying eggs.

These first eggs swiftly hatch into workers, who take over all elements of building the nest while the queen continues to lay eggs.

While the queen lays eggs, the workers build and defend the nest. In the late summer, male drones emerge, but they do not live long since they perish as soon as they mate with a queen.

All hornets, except the fertilized queens, die in the fall. There is greater variation in the life cycle at tropical latitudes.

There is a significant variation among wasp species concerning their nesting behaviors, hierarchical structures, and life cycles.

Most social animals that live in temperate climates build nests similar to those of hornets, despite the fact that these nests are typically built low to the ground or even underground.

The vast majority of solitary wasps are parasitoids, which means they lay their eggs inside the bodies or eggs of other insects (caterpillars, slugs, etc.).

Because their hosts and prey are mostly unwanted insects and because they do not interfere with crop production, the vast majority of solitary wasp species are beneficial to humans.

Some species of parasitoids are even cultivated for their pest-control abilities in agricultural settings.

Diet is another unique difference between Wasps and hornets. Adult hornets get most of their nutrition from plant materials and have a particular fondness for sweet items such as nectar, sap, rotten fruits, and manufactured sugary foods.

They will also hunt down and consume other insects, which they will then use to feed their young. The hosts’ bodies are the first meals consumed by parasitic species, which is where the larvae develop.

After this, the larvae are fed the insects that the adult predators eat. Adult wasps may feed only on honey, scavenge dead animals, or even prey on other insects.

In certain species that live in social groups, the larvae create sugary secretions consumed by the adults.

The way both species use their stings makes room to give more information on the difference between Wasps and hornets. Hornets utilize their stings (as well as their bites) to kill their victims and protect their nests.

Hornets can deliver several stings, unlike bees, which have barbed stingers and pass away after each one.

Due to the high concentration of acetylcholine in their venom, hornet stings cause far more excruciating pain in humans compared to those of other species of wasps.

The potency of the venom differs among species. Swarms of hornets, as opposed to individual stings, are more likely to prove fatal to humans (except for allergic reactions).

Certain species of wasps, such as hornets and yellow jackets, are the most aggressive of all stinging insects. Because it develops from a female genital organ, only the females have stingers.

The Asian giant hornet is the largest hornet in the world. Its stinger measures 6 millimeters in length and can inject significant quantities of venom.

Their venom is comparable to the sensation of having a hot nail pushed into the skin. Scientists believe they are responsible for the deaths of thirty to forty individuals yearly in Japan.

The European hornet is the type of hornet that is found most frequently in North America. It is a carnivorous species of medium size.

Digger wasps can either create their burrows in the ground or use pre-existing holes to hatch their young and feed them paralyzed insects.

SEE>  51 Types of Beetles in Missouri

These wasps are fairly prevalent throughout North America. The juvenile wasps spend their first winter underground, remaining dormant until the spring.

Female velvet ants are also a species of wasp. However, they appear huge and do not develop wings.

Spider wasps are a species native to South America that live in isolation and are known for their predatory behavior on spiders that are much larger than themselves.

Another striking difference between Wasps and hornets is how they make their nests. Both species have a variety of different nest styles.

Wasps and hornets can construct their nests from fragments of chewed-up wood fibers and saliva. When comparing the sizes of the nests, a normal hornet nest can grow to be as huge as a basketball or even larger, mostly on the branches of trees, under eaves, and in shrubs.

The number of workers in their colony, in addition to the queen, can range anywhere from 100 to 700. Wasp nests are hexagonal in design and range in width from 6 to 8 inches, although wasp colonies are much smaller, containing only 20 to 30 insects.

Their nests are typically on branches, but you can also find them in eaves, pipes, or other protected spots.

Some species of wasps live alone and construct mud tubes to dwell in, either on top of structures or beneath.

Comparing hornets to wasps, hornets are more dangerous since they are more aggressive and can deliver several stings; in addition, hornet stings can occasionally prove lethal to humans.

Wasps are significantly more aggressive than bees; unlike bees, they can deliver many stings when they feel threatened.

Both of these animals are predators. Hornets are social insects, whereas wasps, depending on the species, can either be sociable or solitary in their behavior. Hornets live in colonies. 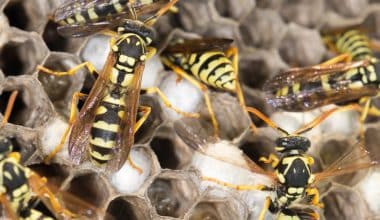 Read More
IInsects
Oregon is home to a wide variety of insects, and wasps are no exception! There are many types… 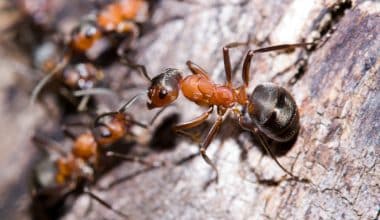 Read More
IInsects
If you live in Wisconsin, chances are you’ve seen an ant or two scurrying around your yard. But… 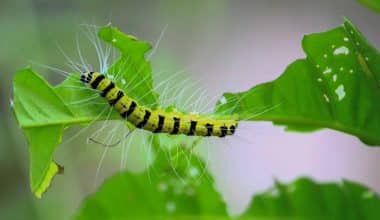 Read More
IInsects
Kentucky has many types of caterpillars, not just the dreaded Eastern tent caterpillar, which seems to be the… 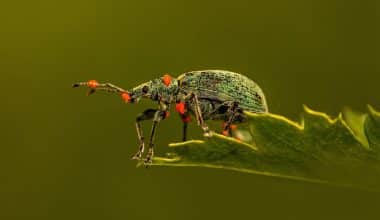 Read More
IInsects
In Connecticut, there are dozens of different types of beetles which can infest your home. If you live… 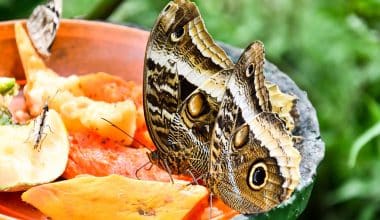